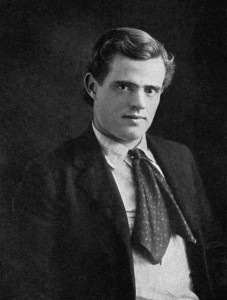 On July 12, 1897, London (age 21) and his sister’s husband Captain Shepard sailed to join the Klondike Gold Rush. This was the setting for some of his first successful stories. London’s time in the Klondike, however, was detrimental to his health. Like so many other men who were malnourished in the goldfields, London developed scurvy. His gums became swollen, leading to the loss of his four front teeth. A constant gnawing pain affected his hip and leg muscles, and his face was stricken with marks that always reminded him of the struggles he faced in the Klondike. Father William Judge, “The Saint of Dawson,” had a facility in Dawson that provided shelter, food and any available medicine to London and others. His struggles there inspired London’s short story, “To Build a Fire”, which many critics assess as his best.
His landlords in Dawson were mining engineers Marshall Latham Bond and Louis Whitford Bond, educated at Yale and Stanford. The brothers’ father, Judge Hiram Bond, was a wealthy mining investor. The Bonds, especially Hiram, were active Republicans. Marshall Bond’s diary mentions friendly sparring with London on political issues as a camp pastime.
London left Oakland with a social conscience and socialist leanings; he returned to become an activist for socialism. He concluded that his only hope of escaping the work “trap” was to get an education and “sell his brains.” He saw his writing as a business, his ticket out of poverty, and, he hoped, a means of beating the wealthy at their own game. On returning to California in 1898, London began working deliberately to get published, a struggle described in his novel, Martin Eden. His first published story was “To the Man On Trail”, which has frequently been collected in anthologies. When The Overland Monthly offered him only five dollars for it—and was slow paying—London came close to abandoning his writing career. In his words, “literally and literarily I was saved” when The Black Cat accepted his story “A Thousand Deaths,” and paid him $40—the “first money I ever received for a story.”
London began his writing career just as new printing technologies enabled lower-cost production of magazines. This resulted in a boom in popular magazines aimed at a wide public, and a strong market for short fiction. In 1900, he made $2,500 in writing, about $69,000 in today’s currency. Among the works he sold to magazines was a short story known as either “Bâtard” or “Diable”, in two editions of the same basic story. A cruel French Canadian brutalizes his dog. The dog retaliates and kills the man. London told some of his critics that man’s actions are the main cause of the behavior of their animals, and he would show this in another short story which was to be The Call of the Wild.

In early 1903, London sold The Call of the Wild to The Saturday Evening Post for $750, and the book rights to Macmillan for $2,000. Macmillan’s promotional campaign propelled it to swift success.
While living at his rented villa on Lake Merritt in Oakland, London met poet George Sterling and in time they became best friends. In 1902, Sterling helped London find a home closer to his own in nearby Piedmont. In his letters London addressed Sterling as “Greek,” owing to his aquiline nose and classical profile, and signed them as “Wolf.” London was later to depict Sterling as Russ Brissenden in his autobiographical novel Martin Eden (1910) and as Mark Hall in The Valley of the Moon (1913).
In later life London indulged his wide-ranging interests by accumulating a personal library of 15,000 volumes. He referred to his books as “the tools of my trade.”

Comments Off on Jack London